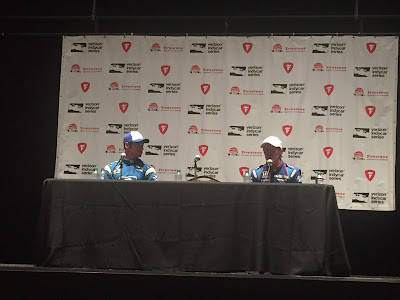 Things ran pretty smoothly for Simon Pagenaud and his Team Penske crew in 2016 as they rolled to five wins and eight podiums on their way to the 2016 Verizon IndyCar championship. Unfortunately, the 2017 season didn’t start the same way at the Firestone IndyCar Grand Prix of St. Pete, as problems with the new brake system put the team behind as soon as the weekend got started.

But they kept grinding away, and got a little luck too, and as a result, Pagenaud finished the day in the runner-up spot behind Sebastien Bourdais, the same finish he had last year at the start of his championship campaign.

“It was a difficult weekend, certainly one of the most difficult ones we’ve had in a long time,” Pagenaud said. “It was such a well-oiled machine last year and you throw one new component, in this case, the brakes, and it goes back to zero and you go back and start again.”

Pagenaud struggled with the No. 1 car through three practice sessions, then could only manage to qualify for Sunday’s 110 lap race around St. Pete’s 1.8-mile, 14-turn course. The team went to work on Saturday night and the car came to life on Sunday, with Pagenaud saying he felt like he was “back home” in the cockpit.

Like Bourdais, who started 21st, Pagenaud dodged a bullet on the very first lap of the race when he had to work around a Turn 3 accident between Graham Rahal and Charlie Kimball. The team had decided to pit a little earlier than the leaders in a quest to pick up some good track position, and luck was shining on them again when a yellow came out a couple of laps later and Pagenaud was shuffled up to the point.

He led Laps 27-36 and was up front for 13 laps on the day. Needing to save fuel, he wasn’t able to make a run at Bourdais, and finished 10.3508 seconds behind his fellow countryman.

“We regrouped and that’s where this team is incredible. This is a championship team, regrouping and understanding the issue we were having in qualifying,” Pagenaud said. “The car was fantastic in the race. After that we were a bit lucky with strategy, but that was the plan, and thanks to Kyle Moyer and Ben Bretzman for their work on that. We had to save fuel to manage to the end but Bourdais was untouchable.