St. Petersburg, Fla. (March 12, 2017) -- When Sebastien Bourdais said down with his Dale Coyne Racing engineer, Craig Hampson, Saturday night to work through strategy for Sunday’s IndyCar Firestone Grand Prix of St. Pete, he didn’t think there was much they could do to fix their predicament.

Bourdais and his No. 19 DCR machine had been one of the quicker cars around the 1.8-mile, 14-turn temporary street circuit, but a first-lap crash in Turn 13 in qualifying Saturday left the 38-year-old Frenchman – and current St. Pete resident -- at the back of the field in the 21st starting position.

A lot was going to need to go Bourdais’ way if he wanted to get to the front when the green flag fell, so imagine his surprise Sunday when 110 laps later he found himself covered in confetti in Victory Lane and celebrating the 36th win of his IndyCar career. Bourdais was able to take advantage of a yellow flag in the first third of the race to get to the front, then led 69 of the final 71 laps to win for DCR in his first race back with the team he had competed with in 2011. 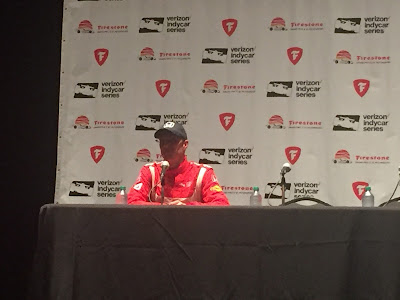 “I’m speechless to be honest,” Bourdais said. “To come up on top with a lot of family and friends here, and the community supporting me, it’s a great feeling.”

Bourdais and the No. 19 DCR machine had been quick all weekend, but in qualifying Saturday he had a first-lap incident that left him without a time and starting at the back of the field.

“You are thinking that you are having a great weekend, you have a good car that was on rails, is consistently fast, and you think things are going to go to plan,” Bourdais said. “Then Saturday, I felt miserable about myself because I (thought I) threw it all away. I left the meeting thinking that we were going to do the best we can but there was no way we were going to make any headway.”

The race itself didn’t get off to a very good start, either, as Bourdais had to negotiate a Turn 3 crash involving Graham Rahal and Charlie Kimball. But once he got going, he starting picking up momentum, and was knocking on the door of the Top 10 by the time he made his first pit stop.

The plan was to pit early and hope for a yellow flag to get track positon, and that’s exactly what happened. With the leaders stretching the fuel window a little longer, they were caught out on a Lap 26 caution that flew as the result of contact between Mikhail Aleshin and Tony Kanaan. That flipped the field and sent Bourdais – as well as Pagenaud, who after starting 14th was on the same strategy – to the front, where they stayed the rest of the race.

“We wanted to pit on the (early) side of the window because we didn’t want to get caught up by a yellow, then everyone in front of you except for one guy gets caught up and next thing you know we are P2,” Bourdais said. “What happened Saturday is pretty irrelevant at that point. At that point in my head I was thinking I was happy with where I was at.”

With the exception of Laps 55-56, which were led by Takuma Sato, Bourdais and Pagenaud led the rest of the race, with Bourdais passing Pagenaud for good on Lap 84.

Pagenaud was content with his runner-up finish as he had brake difficulties all week that led to a poor qualifying effort as well on Saturday. He and Bourdais were teammates when the pair raced in France a decade ago, and was happy to see his friend and countryman win in his first outing with his new team.

“It’s 1-2 for the French! Sorry for the French Revolution, guys,” Pagenaud said. “When everything is right (Bourdais) is one of those guys that is hard to touch, and (Sunday) he showed his strength. He won Champ Cars four years in a row, he’s one of the greats.”

Bourdais’ win breaks a tie with Bobby Unser for sixth all-time, and moves him just three behind Al Unser, Sr. for fifth.

Scott Dixon battled back from a mid-race mechanical hiccup to finish third, while Ryan Hunter-Reay and Sato rounded out the Top 5. James Hinchcliffe, who led 21 laps and dominated the race up until the Lap 26 yellow, finished ninth.