Good morning from St. Pete! I'm putting my sportswriter hat on and will be live blogging the events from the media center -- except for the times I go out and actually watch some of the race. When I'm in the media center I'll be watching the TV feed and listening to the IndyCar Radio broadcast.

While I'm sure much of what I report will be a bit redundant to some, it will also be sprinkled with my own commentary. This is the editorial part of my coverage today, so I'll throw a lot of my opinions in here. I'll have the more serious stuff out later tonight or tomorrow when I get home and sleep until noon to catch up on what I have lost this week.

If you ever want to work in racing, there are two things you need to know: 1) you won't sleep a lot and 2) you will do a ton of walking, especially if you work in one of the developmental series as we don't get the best paddock assignments.

The media center actually runs right along the straight between Turns 9 and 10, which has already seen some action today. During the IndyCar warm-up this morning, Ryan Hunter-Reay lost his brakes and crashed hard into the tire barriers. Walking in I saw him riding back to the paddock on a scooter so it looks like he will be OK.

The car sustained some pretty heavy damage, so we will see if they decide to fix it or go to the backup car. His shunt no doubt will bring more concern among the teams, as this weekend they have experienced lots of problems with the new brake package.

Warm-up is over and the Indy Lights race is about to begin. Here's hoping for a fast and safe day of racing.

More on the warm-up

Looking at the time sheet from this morning, it appears that Scott Dixon is the early favorite to win the race, and Honda might been resurrected.

Dixon turned a lap of 1;01.9292, while Helio Castroneves was second and defending champ Simon Pagenaud was third. Again, who knows what everyone was working on this morning, but Dixon has been fast in every session this weekend. He has finished second three times here, but surprisingly has never won.

If you look at the combined results from all sessions, Honda has the six fastest times and seven of the top 9. As I blogged about earlier in the week, Chip Ganassi pretty much always gets what he wants.

Castroneves will be interesting to watch today. He's won three times at St. Pete and has stood on the podium six times in 11 starts, but after a sub-par qualifying effort he will begin the race in the 16th starting position. With teammate Pagenaud starting 14th, does Penske Racing take one of them off-strategy in an effort to get them to the front? Both will be starting the race on black tires. 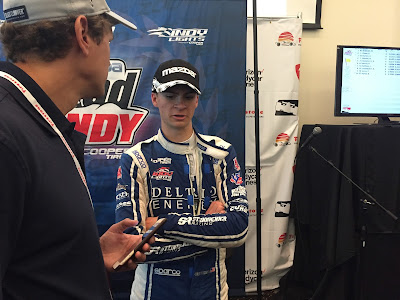 Pole-sitter Colton Herta, who finished second in the Race 1 yesterday, took the lead into the first turn and never gave it up to pick up the first Mazda Road to Indy win of his career. Santi Urrita was second and Pato O'Ward finished third.

Herta, of course, is the son of Bryan Herta, who won the Lights title in 1993, won four times in CART and IndyCar and has two Indy 500 wins as an owner. Colton leaves St. Pete with the points lead and will be back on track in a Lights car at Barber in April.


While his name and early racing success. naturally brings high expectations, Herta said he's focusing on development and knows they aren't going to win all of the races. And besides, since he only turns 17 in a couple of weeks, it's going to be a couple of years before he can think of moving up the final step of the MRTI ladder.

"I have plenty of time (to get there)," he said. "To come out of a this weekend with a championship lead, we just have to work at keeping it going."

A member of the media asked Herta if he told the instructor when he went to get his driver's license that he was a race car driver. Herta said he did not, but did mention that he passed his behind the wheel test the first time, unlike his dad, who needed two tries.
Posted by Mike Knapp at 8:55 AM