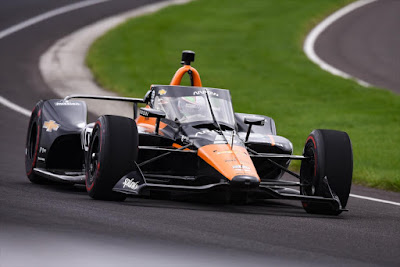 After a long, cold, dreary winter, IndyCar is finally back!

OK, the winter was only cold and dreary for a stretch, but it has been 170 days (give or take depending on when you read this) since the series was last on track in St. Pete.

This year gets started at Barber Motorsports Park, of course, and starts a busy stretch of four races over three weekends, then of course the Month of May (or 15 days of it) gets going before the green flag for the Indy 500 drops on May 30.

The wait was hard, but it was worth it. Seventeen races lie in front of us over the next five months in what could be the most competitive season of IndyCar we've ever had.

As usual, I have a lot to say about the potential that this season shows, so let's throw out a few predictions for the coming season.

IndyCar Champion: Alexander Rossi. After finishing P2, P3 and P9 in the season standings the last three years, I think it all comes together for him this year. Last year he was a victim of lots of bad luck, and some poor qualifying efforts put him in a position that got him swept up into a couple of incidents. Four finishes of P20 or worse -- especially crashing out of the 500 and finishing 27th -- were what did him in, but he did post four podiums in the final five races. If he cleans that kind of stuff up and the team puts a great car underneath him, he will be raising the Astor Cup in his home state of California in September.

First first-time winner: Pato O'Ward. O'Ward knocked on the door a few times last year, with four podium finishes. He lost his tires at Road America 2 and was passed by Felix Rosenqvist in the final stretches of the race, had another opportunity to win at Gateway and was second in the final race of the season at St. Pete. He's ready and capable of winning, just needs everything to fall the right way for it to happen.

Indy 500 Winner: James Hinchcliffe/Alex Palou/Juan Montoya. This isn't as much as a prediction as it is trying to wish something into existence. If you have followed this space over the last several years, you'd know that I'm a big supporter of Hinch, especially at the Speedway. And, if you've followed Hinch over the last few years, you know that IMS owes him, big time. It's crazy to think that his best finish there is P6, but he has started on the front row three times and knows how to get around the Brickyard.

Palou is also a first first-win contender, but I think O'Ward will have his first win under his belt by the time we get to May 30. I'm biased because I've become a big Palou fan, but it's my blog so I can feel that way, right? He put himself in the Fast Nine a year ago in a Dale Coyne Racing car, so I think his move to Ganassi this year gives him an even better shot at the 500 this May.

Here's why I want Montoya to win: he's one of the best drivers of his generation, and a third 500 win will cement that. If he'd run CART/IndyCar his entire career, he'd be considered one of the all-time greats in this sport. But still, think about it: 2 Indy 500 wins, a CART championship, seven wins, 13 poles and two P3 season finishes in F1, and three overall Rolex 24 wins.

Numbers-wise, lots of people have had better "careers" in each of those disciplines, but show me another driver with that diverse of a winning portfolio over the last 20 years. Sadly, he's remembered more for his NASCAR career and hitting a jet dryer, which is sad, uniformed and just plain stupid. He's magic in a race car, and a third win at Indy, especially at age 45, puts him in a rarified air that we just don't see anymore.

Rookie of the Year: Scott McLaughlin. If Jimmie Johnson and Roman Grosjean were running full-time schedules this year, it could be a tight battle for ROY, but of the three McLaughlin is the only one running all 17 events, so I think he is a lock.

Speaking of, how will this triumvirate of superstars will do? I see people predicting potential wins and podiums, but I don't anticipate that happening until maybe later in the season. Maybe. All three of these guys come to IndyCar with impressive credentials -- with Johnson and McLaughlin being one of the best all-time in their respective disciplines -- but look at the field and tell me how anybody without IndyCar experience is going to compete with this field. No disrespect intended, especially because I'm a big Jimmie Johnson fan, but testing and racing are two different things, and it's going to take a little bit of time for any of these guys to get up to speed.

No doubt they'll do it, they are all three talented drivers, but expecting anything beyond midfield until well in the summer is a bit of a stretch.

Breakout star: Pato O'Ward. I'm not going to get into the discussion that is popular right now that IndyCar has a marketing problem. One, because I'd still love to work for IndyCar someday and two, I believe that any issues mostly start with a budget and goes from there. Beyond that I will stay respectfully silent. But if I were IndyCar, I'd put O'Ward front and center in its marketing efforts. He's young, quick and is part of the future of the series. Not to mention he is multicultural and bilingual, which could be used to create lots of new fans. Not only that, he races for McLaren, which while it doesn't have the same shine in IndyCar as F1, is a massively recognizable brand, and he can be the face of it in the US. Just sayin'.

Driver on the Hotseat: Simon Pagenaud. I hate typing this...I absolutely hate it. Simon has had a fantastic IndyCar career with 15 wins, a championship and an IndyCar title. But, despite a win and three total podiums last year, he finished eighth in the standings on a team that saw his teammates combine for six wins and 10 podiums. He's 37 and in a contract year, and while I don't know the contract statuses of the paddock, there are a lot of young drivers who would love to be in that seat. I mean, I could also throw Will Power on this list as he is in a contract year as well, but every time Will Power seems down on the mat he gets up and starts swinging again. I hope Simon can come back and repeat his 2019 season, because drivers as accomplished as he is should be able to dictate his own terms.

I interviewed Alex Palou a few weeks ago and finally got around to putting it into a podcast! You can listen to it here on Soundcloud and can also check it out on iTunes.