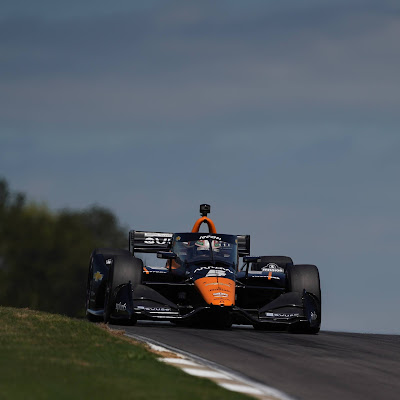 You know one good thing about having guys like Scott McLaughlin, Jimmie Johnson and Romain Grosjean in the field? People who haven't watched IndyCar until today because they got to see one kickass qualifying session.

Qualifying for the Honda Indy Grand Prix of Alabama was as usual a battle, and set up some extremely interesting storylines for tomorrow. Let's chat about a few.

Pato on Pole: The talk all winter long is that Pato O'Ward would be one of the breakout stars of 2021, and he may have even raised those expectations with his pole-winning effort Saturday. On a newly repaved track with plenty of grip, the 21-year-old Mexican threw his car all over the place and made it stick to win the second P1 Pole Award of his career. Rounding out the front row is Angry Alexander Rossi, what is the run to Turn 1 at the green flag going to be like with these two?

Where is Penske?: While three of the four Chip Ganassi Racing cars made it into the Firestone Fast 6, it was the opposite for Team Penske as only Will Power made it to the third round. Power will start fourth next to CGR's Alex Palou, while Scott Dixon and Marcus Ericsson will make up the third row. Josef Newgarden barley missed the Fast 6 for Penske and will start P8, while Scott McLaughlin was impressive in getting through the first round and will start P12. Simon Pagenaud was eliminated in the first round and will start P15 as his qualifying woes continue.

The Rookies: Of course, the three rookies will be a story all year. As mentioned, McLaughlin will start 12th in tomorrow's race but fellow rookie Romain Grosjean flirted with the Fast 6 before being knocked out by Power at the last moment and will start an impressive P7 in his debut race. Seven-time NASCAR Cup champion Jimmie Johnson was a bit off the pace, as expected, and will start 21st on Sunday. Honestly, that is a good effort on JJ's part, people need to realize that this is going to take a while for him.

This all sets up for a great race tomorrow. I'll be back then!

If you haven't had a chance to listen to my latest episode with Alex Palou, check it out here!
Photo credit: Chris Owens/IndyCar Media